The erotic romance film, Fifty Shades of Grey, based on the hugely successful novel by EL James, was released on Valentine’s Day weekend in around forty countries around the world. Early results have show that the film has actually broken box office opening weekend records in eleven of these territories (according to Box Office Mojo). Here at Lovell Johns, we thought it would be fitting to create a map (see below), to represent this data using a colour scheme that consists of fifty shades of grey. It’s fair to say the film has made an impact in the UK, as the film’s distributors Universal Studios, saw the UK’s largest opening weekend in history at $21.1m. Universal Studios also saw its highest ever opening take in France, Russia, and Brazil as well. 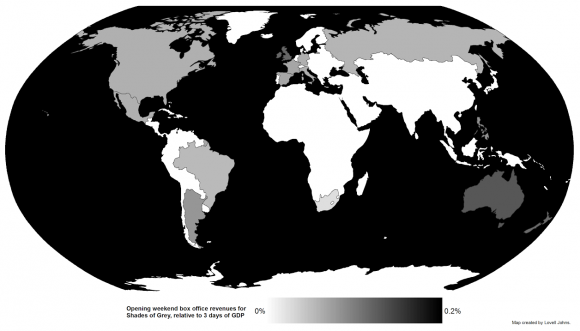 Ticket sales estimates for the opening weekend were released by sources including Rentrak for the fourteen territories shown on the map. The territories are mostly single countries but the film industry groups USA & Canada, and UK & Ireland into single areas.

To take into account the differences in population and wealth between countries, we divided the sales revenues by the countries’ GDP. This gives a very simplistic idea of how much of a country’s cash was spent on the film tickets over the weekend.

The surprising result is that the film has had very similar levels of success across many of the countries shown. From Argentina to Russia, the figures are around 0.05 – 0.1%, with only South Africa lower than this, and Australia, New Zealand, and the British Isles slightly higher.

The map also highlights how difficult it is to distinguish between such similar shades of grey on a map. This type of thematic map would usually use around five different colours so the reader can quickly work out which broad category each country is in. The fifty shades between black and white look almost identical to their neighbours. Such tiny colour differences are even harder to spot on a map, especially when comparing a large land mass like North America to a far away island chain like the Philippines.