Most accurate and up-to-date map of South Sudan 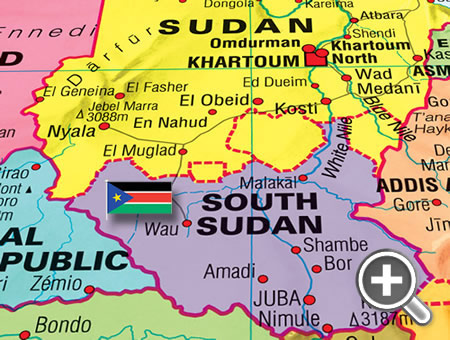 Saturday, July 9, 2011 saw a birth of a new nation and changed the world map as we knew it. South Sudan on this day celebrated its independence and became the world”s 196th country.

In January of this year the people of South Sudan participated in a referendum on secession, a provision of the 2005 Comprehensive Peace Agreement (CPA) that ended the more-than-twenty year civil war between the North and the South. Southern Sudanese voted overwhelmingly (over 98%) to separate from northern Sudan during the referendum.

The Gaurdian last week published a “new world map” defining the borders between south and north Sudan. The Guardian however, is jumping the gun declaring the border as definitive.

The Republic of South Sudan will become an independent country on 9 July 2011, although this has only been recognised by certain countries (and very few African countries).

This week Sudan President Omar al-Bashir has said the disputed border region of Abyei is a source of potential conflict with newly independent South Sudan.

Talking to the BBC, President Bashir said he would have preferred to preserve the unity of Sudan. But the will of the people in the south had to be respected to avoid a return to armed conflict, he conceded. Asked about potential sources of friction in the future, Mr Bashir pointed to Abyei, a border area claimed by both north and south.

Our view is that the border between Republic of South Sudan and Sudan will follow existing state boundaries, as shown in the image above. However, the areas of Abyei, South Kurdufan and Blue Nile remain undecided whether they will be in the north or south. For this reason, we would suggest that it remains too sensitive to split the country in two at this stage (as an international border) and we should retain the pecked line indicating disputed boundaries for the north/south split (also showing of Abyei, South Kurdufan and Blue Nile as disputed).