Our Approach to Cartographic Production

Celebrating 50 years in business in 2015, Lovell Johns has a rich heritage in map-making and boasts a complete range of skills in cartographic production. Employing over 22 people, our core business of cartographic design also encompasses illustration and artistic works, as well as research and editorial elements. We work with major publishers and leading international travel brands but also have the flexibility to undertake more personal and individual commissions. 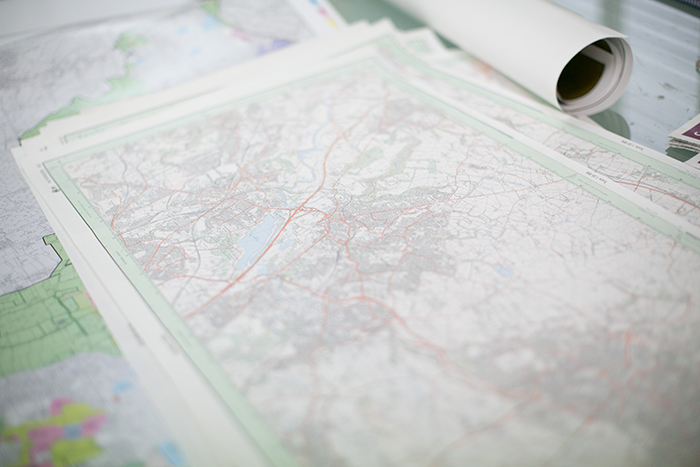 Our production methods have completely changed in the last 25 years.

Up until the late 80’s we created maps by drawing or scribing the detail (process of scratching into an opaque layer) onto a piece of film. This was done for each feature (road, river etc) and then these layers were then photographically combined with screen patterns into four pieces of film, one for each colour (cyan, magenta, yellow and black). The printer then made printing plates of each colour so they could be lithographically printed to paper

We used to have two dark rooms with contact frames, a large camera and developing baths to process the film.

In the late 1980’s we purchased our first computer system for map production. This was a very crude and expensive CAD based system which used reels of magnetic tape for transporting map files. We bought our first Apple mac in 1992 and soon realised the graphic capability and ease of use made it popular with our cartographers.

Soon after we developed our own software to convert the large CAD files into the Apple graphics environment so we could exploit the advantages of both systems.

In the mid 90’s we bought one of the first ESRI ArcInfo (ArcGIS as it is now called) software packages from Doric Computer Systems (ESRI UK did not exist). ArcInfo was a MS DOS based set of programs which had to be run from a command line, you even had to tell ArcInfo to re-draw the screen by typing the command “DRAW”!

Thirty years on, the complex map database systems (Geographic Information Systems) are much more sophisticated and we use these for capturing and collating basic map information and content. These systems enable us to hold very large amounts of mapping information as a database and change scales, projections or merge with other data.

These GIS systems are very efficient at holding and managing large map databases, however, in our view they don’t offer some of the complex graphic styling we use when making maps. For this reason we will always take a map through to a high end graphics package such as Adobe Illustrator, Photoshop and InDesign for the final styling and output.

We still write our own software to provide further functionality not available from off the shelf packages or to help convert data from one system and format to another.

To create a meaningful and well-designed map which fits the end user requirements, all of our maps go through a series production processes including:

Here we develop the design based on who the map is aimed at and what it needs to show (we have a separate page on Cartographic Design).

We often need to research all of the content that will appear on the map, for example climate statistics or population (we have a separate page on Research and Editorial).

If the source material is an image or paper copy we have to capture or digitise that detail into our mapping system. We capture the raw data and build it into a map database.

This includes the selection and classification of data in such a way so we can add it to a map.

This is the process of turning a complex map database into a map by adding the correct line styles, symbols, areas fills and typefaces.

Positioning the type so it’s not crashing into other detail and ensuring the data is shown with the correct hierarchy are a couple of the things we would look at.

The final graphic design, production and cartography is done using graphics packages such as Adobe Illustrator, Photoshop and InDesign.