Most satisfied city in Europe – how does yours compare?

What can truly determine a city residents level of satisfaction? Satisfaction may be measured by health care services, education services, level of safety, employment opportunity, or even for some, the quality of air. All these factors and more, can each individually contribute to a person’s overall level of satisfaction. In this article I will be looking at which cities are reportedly the most satisfied in Europe.

The Office for National Statistics and the European commission, collected data from a Perception Survey, which interviewed roughly 49,000 people across 79 cities in Europe, and then provided The Guardian with the results. When conducting the survey residents were given the opportunity to explain what they thought about their overall satisfaction in the city in which they reside.

Below is a map which has been created which shows the overall percentage (%) of city satisfaction from the 79 cities which were polled around Europe. 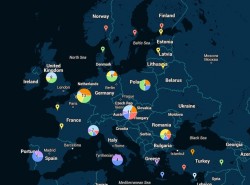 Upon my first examination of these results, the figures took me by somewhat of a surprise. The Map shows how more mediterranean cities are reportedly less satisfied than others, and in general terms, Britain seems overall okay with their level of satisfaction in comparison to other European cities. Nevertheless these results are fairly interesting and entice some thought provoking questions.

The map shows that Reykjavik, which is the capital city of Iceland,  is reportedly the most overall satisfied city in Europe, with 98% of the 79 residents that were polled, being overall satisfied with the various conditions of the city. Reykjavik also has low urban unemployment, which has ultimately lead to a higher level of satisfaction, and also the residents believe that their capital city is doing a really great job. In contrast, Athens, the capital of Greece, is reportedly the least overall satisfied city in Europe. Only 56% of the  residents polled indicated a level of overall satisfaction. This is a shockingly lower figure when compared with the all the other percentages, with the next lowest percentage being 74% for Naples in Italy.

But why do you think this is? For a start, Athens have been hit hard by the financial crash, resulting in a low level of satisfaction from the set off. Also, the Greek capital ranks the lowest in residents satisfaction of safety, public space, health services, educational services, and also, household finances. There has also been a boom in youth unemployment, and the slow economic recovery after the financial crash has really tested the Athens citizens. Again at the bottom end of the spectrum, the citizens of Palermo have very little confidence in the leadership of their city and also their transport. Youth unemployment rates have been recorded 36% across the whole of Italy, which has lead to protests amongst the unemployed, so it’s no surprise that Palermo is also one of the least satisfied cities in Europe.

Here are some tables which have been created to show both the top 5 most, and least satisfied cities in Europe.

Do you believe these findings to be true? Have you ever travelled to any of these cities and agree/disagree with these results? Let us know! Tell us in the comments below.