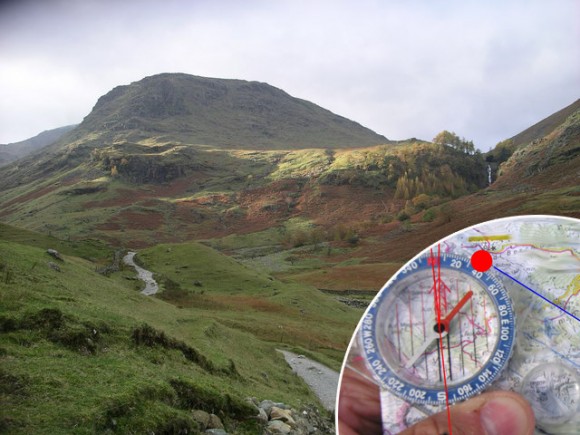 If you’re thinking about taking part in the Three Peaks Challenge as an individual or in a group at least one of your party needs to be comfortable using a map and compass particularly in case the group becomes split up. Don’t rely on a GPS system or your mobile phone. Become skilled in route finding with your maps. The more skills you have in map reading the more you will enjoy the challenge.

Before you set out on any outdoor activity it’s always good to consult a map to get a good understanding of where you are going or to work out the best route. GPS devices and map apps on your phone are good for locating your exact position, but it’s quite hard to get an overall perspective on a whole walk or cycle when looking at such a small screen. When you plan a route you need to have a good understanding of the terrain and your options for cutting the walk short or possibly extending it, is there any stop off points etc.

Different styles of mapping and the cartographic style used

For UK mapping our national map series from the Ordnance Survey uses standard line styles and colours to indicate features on the ground like footpaths.

For example, on a 1:25,000 Ordnance Survey map, a footpath (right of way) is shown as a dotted green line irrespective of the type of footpath. For footpaths, especially in mountain areas, many map makers have taken the approach of grading footpaths by difficulty, for example the French publisher IGN use a dashed line to indicated a way marked footpath, a dotted line to indicate a path or track with no markings and a series of small crosses to indicate a difficult or hazardous path where perhaps some climbing is involved. Obviously any grading on footpaths is subjective and it’s always advisable to try a few paths out to try and get a feel or understanding on how any grading system has been applied. One person’s easy path or climb may not be viewed the same way by someone else.

When you’re in more remote areas it is important you take a compass with you and know how to orientate the map and take bearings. On a bright sunny day, when you can see for miles, this may not be an issue, but when the cloud comes down and visibility is impaired, it can be very easy to lose your bearings, at this point you could have the map upside down and you wouldn’t know.

There are some things to check when buying and using a map, the first is the projection the map is drawn in and whether the map has latitude, longitude grids on it. This is important because many GPS and phone apps will give you your location in latitude, longitude coordinates. The Ordnance Survey maps have two graticules marked on them, the main one is the National Grid (in metres) and the other is latitude, longitude.

The other thing to watch out for is any correction required for magnetic north (usually indicated at the bottom of the map). This is where the map doesn’t exactly point to the magnetic north (as indicated by your compass). The north point on all Ordnance Survey maps is approximately 4 degrees east of the direction your compass will point!