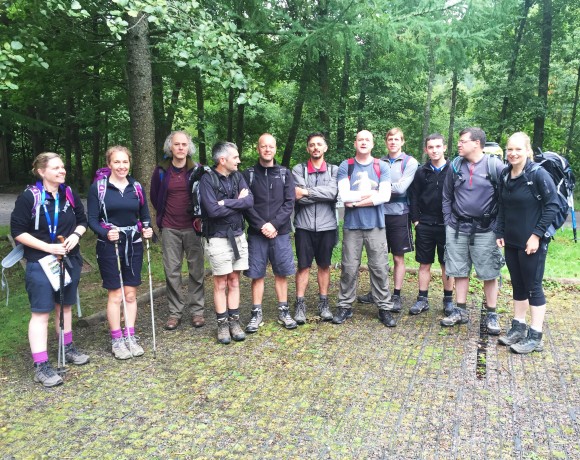 The Day Before – Two (buses) become one

The team set off from our offices in Oxfordshire Friday mid-morning to avoid traffic. We hired two good sized minibuses for the journey in the belief we all would have plenty of room to rest and change clothes.  The mood was good on the minibus and there was plenty of anticipation and good humoured banter between myself, Neill and Symon. We made good progress on the drive up and stopped in Tyndrum for pizzas. This is where we learnt the other minibus wasn’t going any further as the power steering had failed.  We all realised this was to be a game changer and the challenge would become even tougher in terms of slicker change over’s and no possibility of having a faster group. We arrived at the Ben Nevis Youth Hostel at 10.30pm and after a quick drink we all went to our dorms to settle in.

With good weather we set off eagerly at 10.30am and the start was fairly easy and flat. This allowed us to set a good pace and fly up the mountain. We reached the peak in less than three hours and after a few photos began the descent. The good pace continued and gathered momentum. This is the moment where the whole challenge became more difficult for me as I damaged my right knee.  With hindsight I should not have come down too fast. The weather however was still on our side and the views were spectacular. Staff at the hostel had said the experience can be less dramatic when the mist descends, so we felt very lucky to have a clear day. 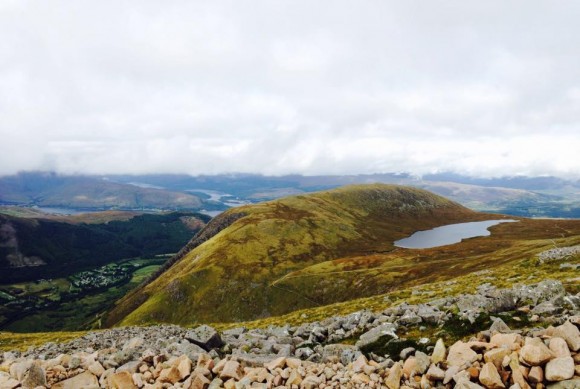 The descent took little over two hours and all of us made it back to the minibus safely. It was a bit cramped on the minibus and there wasn’t enough space to change or freshen up.

Our drivers, Dave M and Jim did an excellent job in getting us back on track, stopping at Abington to refuel and a bite to eat. They made up good ground in reaching our next climbing destination.

Scafell Pike – Into the Darkness

Setting off at 00.30am felt like a real adventure especially with extra layers to keep us warm and head torches switched on.  This was always going to be a tricky climb in the dark and we decided we needed to stay together as a group for safety reasons. This was the right decision but hampered any hope of finishing within 24 hours.  The climb felt steeper than Nevis in parts and required some nimble clambering. With Dave S shining his torch, we passed through the mountain stream; which at night required concentration.

Still climbing, the terrain consisted of shattered rock and the experience became ‘otherworldly ‘as we saw the torches of other parties above us. However, this wasn’t science fiction – we had a challenge to complete!

After going off track slightly we had reached the peak. I felt at my most positive at this point, believing we had broken the back of this challenge. The descent was slow though as we took care climbing down the rocks.  It took much longer than planned and fair to say we all were  exhausted.

The mission was now to get to the last destination – Snowdon in North Wales. We knew we couldn’t complete within 24 hours so the goal now was to complete all three safely.

Snowdon – A storm to remember

We were all fatigued after Nevis and Scafell but were comforted in that Snowdon should have been the easiest of the three. We later found out this was a wrong assumption to make.

We decided to take the most direct route – the Pyg track where immediately we were faced with steep boulders to tackle.  We found this quite tough and two of the team had to head back as the general impact of the earlier climbs took its toll. The weather became worse with the rain and wind picking up. I wasn’t the only one with knee trouble so the use of walking poles helped in distributing some of the weight.

The ascent continued to get more difficult as we clambered treacherous rock faces on our hands and knees.  Of the eleven who started this feat, seven of us remained to reach Snowdon’s peak. Dave S did a great job in holding back, making sure we were still together. Liz sprained her ankle but continued to climb. The weather did not relent and at times we had to stop just to stay on our feet.

We reached the peak absolutely exhausted and despite wearing waterproofs most of us were soaked through and freezing cold. The cafe at the peak offered some rest and a chance to warm up. Injuries to two of the team meant them taking the train back. This was a hard decision but those left were envious of the two that did not have to endure the descent.

The remaining five set out again to make the last descent of the challenge. After overcoming the steep and rocky terrain below the peak, we decided to take the miners track which although longer was flatter and less painful on the joints.  Once on the track a feeling of being energised took over.  I was able to enjoy the moment and take in the scenery. With the car park in sight the pace began to pick up. 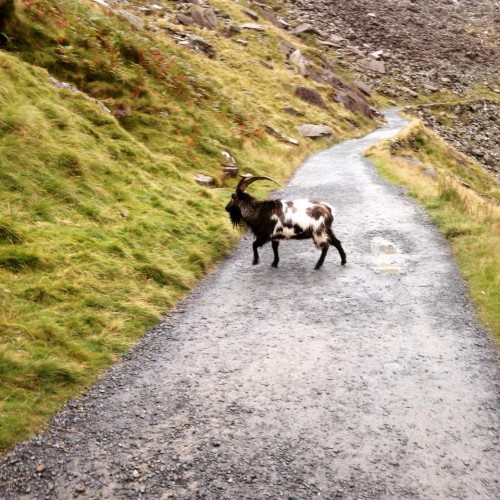 Get off my track!

We had done it and what a feeling it was. We celebrated with champagne on the minibus and congratulated each other on what was a truly remarkable challenge.  A nice touch was Dave M buying everyone ‘Three Peaks’ fridge magnets bought from (in his words) a section of the shop which had old tat in it. 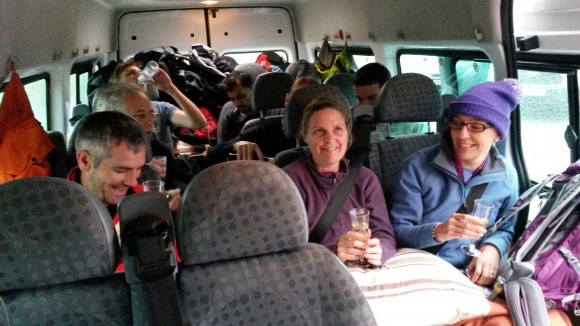 Oh the glamour – we did it!

To sum up the Three Peaks challenge; it was tough, inspiring and emotional. The sense of achievement and team spirit it evokes is genuine and I would recommend it to anyone.