As this year marks the 50th anniversary of Lovell Johns, we thought it would be a great idea for you to get to know more about the staff, and their backgrounds. Therefore, we have decided to run a series of team stories, which will help you to better understand the history of Lovell Johns, and the individuals that make the company what it is. 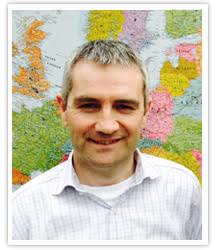 As a teenager growing up in Blackpool, my interest in computers was mostly driven from playing arcade games like Galaxian and watching films like TRON with its early computer graphics.

I chose to do a degree in Computer Science at Oxford Brookes, however, this was a modular degree and we were encouraged to choose a joint subject to study. One of the options was cartography and since I had a range of outdoor hobbies such as fell walking, climbing and cycling, this seemed like an appealing, if slightly left field choice.

I finished my degree in 1990 and found a job in Manchester working as a computer programmer for a software development company. The company specialised in developing stock tracking and control software which was pretty dull programming work, so when the head of the cartographic course at Brookes, Roger Anson, called me to say Lovell Johns were looking for someone to manage and develop their new digital cartographic system I was intrigued and jumped straight on a train.

I arrived at Lovell Johns to find they only had two computers, an Amstrad word processor used for typing letters and a brand new computer system they had just bought running some mapping software called Image Mapper. Apparently they had won two mapping projects on the basis of having the digital mapping system without actually having any skills or knowledge to use it. Along with the PC there was a large A0 digitising table and a magnetic tape reel machine which looked like something out of an old science fiction film.

PC computer systems back then were MS DOS based and command line driven, for most people unless you had a computer science degree, these were difficult to understand and use. Then a company called Apple introduced a basic little black and white computer which had a mouse and screen where you could just click on folders and applications. In 1992 Lovell Johns bought an Apple IIci and this really helped open up the use of computers to the rest of the company. The PCs and Apple systems were very different.

The PCs used CAD based software which allowed the user to digitise in a map base using the digitising table. Then the files were written to a magnetic tape reel and taken to Colourmap Scanning in Putney, London. Colourmap had a Scitex film plotter and could convert the CAD file to something they could then plot onto photographic film. The process was slow and I spent many a late night in Putney waiting for large sheets of film to be developed.

The Macs were different, they used quite simple software to enable users to enter text or draw basic pictures on screen using the mouse. The early versions of applications such as Quark Xpress and Aldus Freehand were quite primitive back then. To output the text or a basic image we had to write the file to floppy disk and take it to an image setting company who had a small format Linotronic image setter and could print the file onto film.

I thought this was a crazy way to work and was frustrated that mac was good at graphics but impossible to draw complex things on whereas the PC was easier to enter and digitise complicated and large format base mapping but it was hopelessly difficult to get the cad file output to film. I looked at the formats the systems used and wrote some software to convert from one format to another between the PCs and Macs. This was a big step forward in those days as it linked the systems together and meant we could have a digitising or data entry department and could then extract and convert data for the graphics or cartographic department to use on the macs, this is how our cartographic production flow line developed.

For the first few years I was the digital mapping department at LJ but slowly as digital technology improved and the price dropped through the mid 90’s, Lovell Johns went through a process of migrating people with conventional cartographic skills into the digital world.

For a while I became the Systems Manager, responsible for the purchase, integration and training on the new digital systems. Throughout the rest of the 90’s I helped Lovell Johns move all of its production to a digital platform.

By the mid 90’s we were ahead of the game when it came to cartographic production techniques and processes. For the next few years I travelled to many other mapping companies and publishers around the world in the USA, Tokyo and other parts of Europe providing and selling services, software, consultancy and training. I once flew to Chicago for a day and then on to Tokyo for two days before returning back to the UK.

I became Operations Director in 1997 which meant I headed up all production and digital development. Then in 2000, Lovell Johns was bought by a large South African PLC and I spent the next few years working with our sister companies in Africa, especially MapStudio who were also a mapping company. To broaden my skills I completed a masters degree in business in 2003.

Developments in the digital space and online was becoming more strategically important to the company and in 2004 I was appointed Managing Director to look at how we could move Lovell Johns more into this area or use our online presence to increase sales.

With the development and growth of our e-commerce websites, our direct to consumer sales were becoming more significant, this in turn meant we needed the ability to develop a steady stream of new and innovative products. So in more recent years one of our strategic focuses has been on product design and development.

Liz Murray and I completed a management buyout of Lovell Johns from our South African owners in November 2014.

Over the years our mapping heritage and skills are and have remained at the heart of everything we do and every product we create. On a day to day basis my job function may have changed but whenever possible I still like to get involved in a little bit of programming and systems development work, and in my spare time I’m still doing a lot of fell walking, climbing and cycling.