Island made by global warming included in new atlas 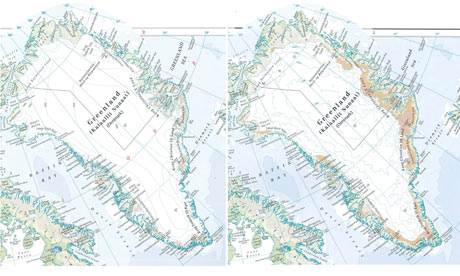 Greenland has lost around 15% of its ice cover between 1999 (left) and 2011 (right). Photograph: Times Comprehensive Atlas of the World

You might not have heard of Uunartoq Qeqertaq, or Warming Island, as its one of the world’s newest islands.

This Thursday the new island was deemed permanent enough by map-makers to be included in Times Comprehensive Atlas of the World.

On January 16th, 2007, the New York Times reported that a new island had been found in Greenland. Warming Island was once thought to be an ice-covered peninsula, but it was exposed as an island when a glacier melted to reveal the strait.