Last year Lovell Johns worked on a publishing project for Millenium House to create the World’s Largest Atlas. Managing Director of Millenium House, Gordon Cheers said “Earth Platinum, the world’s largest atlas will start delivering from 20th February 2012. Earth Platinum is a comprehensive world atlas, featuring a world map for each of the thematic topics, Europe map, Canada map, USA map, Australia map, India map and more. I believe Earth Platinum will present the best national geographic map for every country in the world contained in a world atlas. The physical map of the world and political map of world are the largest ever published in a book. In these changing times, comprehensive maps are even more important than ever.” Opening to an incredible 6 ft x 9 ft (1.8 m x 2.75 m), Earth Platinum, a limited edition has 128 pages and weighs 120 kg and is bound by hand.

Lovell Johns worked on the project from December 2010 to January 2011 and were specifically involved in creating the Russian Federation pages. We had a key part in the project alongside 4 photographers, 88 cartographers, computer programmers, oceanographers, engineers and a shipwreck expert who has located the exact position of wrecks worldwide.

Guiness World Records Australia / NZ are officially verifying the map as a World Record, their spokesperson Chris Sheedy said “we at Guinness World Records are thrilled and honored to be witnessing the production of what we’re sure will be the world’s largest atlas, it will represent the breaking of a record that has stood since circa 1660 and, in this era of digital content, will provide a unique, valuable, enduring and unforgettable perspective on the world we live in.”

The record breaking atlas is on sale from the end of February, contact Millenium House for further information.

In complete contrast, last week our sister site Maps International, reported on the World’s Smallest Map ever created. You can read the story here 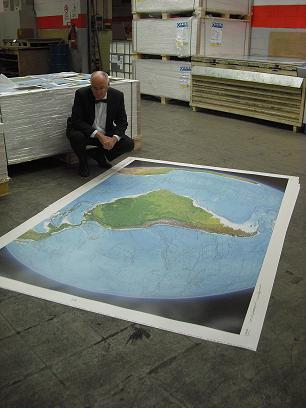