Lovell Johns – A History of Cartography

The early history of cartography can be traced back many millennia to early cave paintings in Greece and Babylonia. The first identified world map is from circa 600BC, the Imago Mundi or Babylonian Map of the World and is on display in the British Museum. 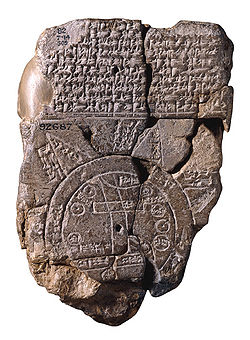 Lovell Johns – A History of Cartography

Production methods have moved on since the manufacture of clay tablets, but the last 50 years has seen probably the greatest change in the history of cartography.

Britain has always been at the forefront of cartographic production and Lovell Johns is proud to play a prominent role in the history of cartography in this country. 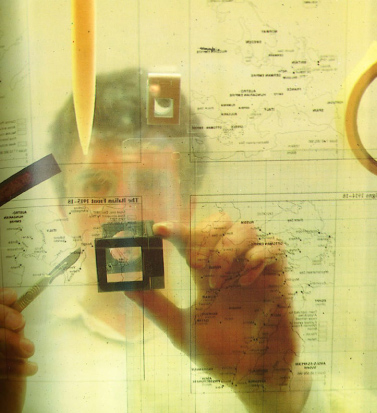 Lovell Johns was founded in 1965, when the Historic Towns Trust approached Colonel Henry Johns to produce a set of maps for their city atlases. The company was set up to meet this need. At this point, maps were produced using glass plates, onto which the linework and detail was etched using chemicals. The process was painstaking and laborious and not a little unhealthy. There was little room for error and amends could not easily be made. The cartographer would need to be sure before committing any detail. A drawing office would have consisted of banks of light tables at this point in the history of cartography.

During the 1970s and 80s, the use of scribecoats* and peelcoats* became the norm for the production of mapping. This was a neater method, whereby photographic processes were used to provide guides onto sheets of registered material, and linework could be traced through onto the film from other sources. Again, corrections were fiddly but not impossible. These films were then used to make negatives, which were duffed* to cover light spots to make printing plates for lithographic printing*. The introduction of litho printing was a huge step forwards in the history of cartography, as it enabled the cheap bulk production of maps. 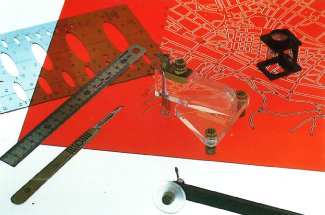 In the late 1980s, the move to digital cartography started, which was introduced alongside more traditional methods. While the drawing office was still using pens, railway curves* and drafting film, patching Letraset or waxed type, the first computers with basic graphics software, were working in tandem. Lovell Johns first digital product was the production of London Transport’s tube map, made using an Image Mapper system, bought particularly for this project. 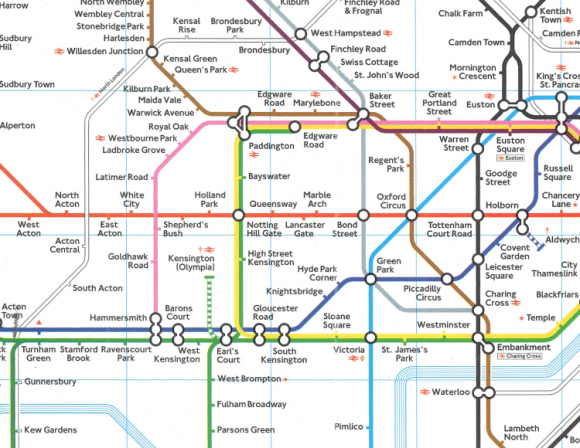 The introduction of the Apple Macintosh and desktop publishing software opened up a new world in the history of cartography, whereby maps could be made quickly and accurately, as well as updated.

Photogrammetry* opened up the use of 3D images for the plotting of map detail, although this technology is now largely surpassed. The increased use of aerial photography, and more recently, satellite imagery, has meant that mapping can cover large and remote areas accurately, making production cheaper and more simple.

Now, map making is a digital art. Most maps are produced in editable graphic formats to make updating straightforward. Manipulation of images make it a relatively straightforward procedure to change the look and feel of a map to suit a particular purpose.

The advent of the use of GIS* has changed the way in which map makers store and manipulate data. This has enabled the production of maps as digital output from geospatial data. Lovell Johns uses GIS on a daily basis to create web and conventional mapping. Our clients can supply their data for processing, manipulation and output in a graphic format.

One of the greatest advances in the history of cartography in recent years has been the increased availability of open source data and software, meaning that more information is now available on a royalty free basis. This has opened up map making to a new set of industries who need no detailed knowledge of projections and datums, but can use free data to produce maps. Lovell Johns makes use of OS Open Data as well as other open sources to create maps at all scales and for a variety of final purposes.

As Lovell Johns celebrates 50 years of map making, and is guaranteed its place in the history of cartography, it is interesting to look back at how the art of cartography has changed into a more scientific discipline. As we look forwards, it is a fascinating time in our industry and one that we are proud to be a part of.

Scribecoat: a coated thick film with a removable top layer, which could be scraped off with a pointed tool to reveal a transparent base. Used for fine linework.

Peelcoat: a transparent film with a thin layer of opaque material, which can be peeled off. Used for large areas of fill.

Duffing: the use of pens or a paint like material to fill large areas or light spots on negatives.

Lithographic printing: a method of printing whereby ink is repelled from wetted areas of a printing plate and printed directly onto a material.

Photogrammetry: the science of taking measurements and creating mapping from stereoscopic (overlapping) photography.