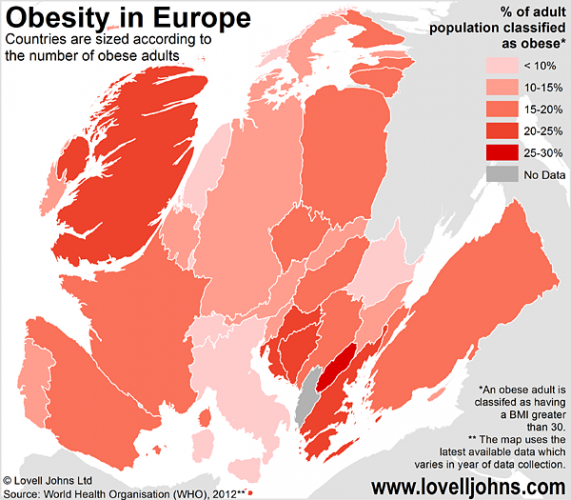 He argues that the accumulation of body fat is a political, not a personal, problem. Across Europe, the average weight (for men and women) was 70.8kg (11st 2lb). In Asia, this was 57.7kg (9st 1lb).
Almost a quarter of British adults are classified as obese.

We thought we would illustrate obesity in Europe using data from the World Health Organisation (WHO). The ‘Obesity in Europe’ cartogram demonstrates how distorted the land space becomes when conveyed by the data . It has had its Countries resized according to the estimated total number of obese adults. It uses the Gastner-Newman algorithm to resize country areas by a specific value. The algorithm, developed in 2004, is based on a fundamental physics formula usually used to analyse the diffusion of gases. Although the countries are distorted in area, the layout and shapes of the countries are still recognisable.