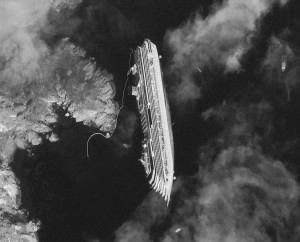 As rescue efforts have been resumed aboard the wrecked Italian cruise ship Costa Concordia, DigitalGlobe have released incredible satellite photographs of the shipwrecked cruise ship. The images provide an insight into the true size of the vessel and the scale of the missions the rescuers and salvage crews have.
Satellite images show how the Costa Concordia is dangerously tipped on its side just off of the Tuscan coastline of the Italian Island of Giglio [Isola del Giglio].

The vessel ran aground on Friday with some 4,200 people on board.
The ship measures 290-meters (950 feet) long, which is almost the length of three football fields.

The commander of the Costa Concordia, Francesco Schettino, had the following comments: “While we were sailing in cruising speed, we hit a rock. According to the nautical chart, there should have been sufficient water below us”.

MaxSea has studied the mapping of the area and provides some interesting information on the navigational charts. By looking at the navigational maps displayed by MaxSea it”s difficult not to appreciate how shallow the water is.