Scare Story or an Inevitability?

With just one week before the historic referendum for Scotland’s independence from the UK, Labour leader Ed Miliband revealed that guards will be put on the Scottish border, where passport and ID checks ‘would have to be looked at.’

The union between Scotland and the UK is one that has served over 300 years now, and could soon be broken if the referendum is to go ahead. Manned border posts may be introduced, and Mr. Miliband stated in an interview, with last weeks Scottish Mail on Sunday ‘If you don’t want borders, vote to stay in the United Kingdom.’ Milibands spokesman also added ‘The last time I looked there were two sides to the border- and we would be in charge of one of them. It would be up to us, not Mr. Salmond to secure our northern border.’

As it stands, the number of Scottish residents backing for Scotland’s independence currently stands at 51%, and 49% are opposed to the campaign. At the moment the polls are showing a greater momentum towards Alex Salmond’s nationalists. (Information correct as of 07/09/2014). Last month 56% of people were voting no for the campaign, and only 44% were voting yes, so the tables have turned quite dramatically within the past four weeks. 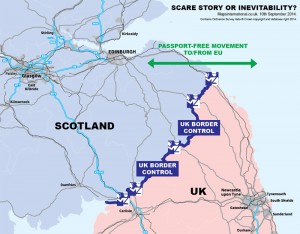 UK Border Control: Map showing where the manned border posts will be placed across the border if Scotland wind independence from the UK. Passport free travel points to/from Scotland to EU.

The Scottish National Party (SNP) claims the border controls to be more of a ‘scare story’, and Salmond has dismissed the issue as “scaremongering”. However, Mr. Miliband’s advisers say it is not an idle threat. It is argued that the new manned borders would cause a lot of stress for people travelling to/from Scotland, and they could prove hugely damaging for business. An independent Scotland would have to create its own infrastructure for controlling its borders, which will be both complex and expensive. Scotland would then no longer benefit from the 20,000 people and over £2bn the UK government spends annually to manage the border. (Source: The Guardian: http://bit.ly/Zecvfj). This would also mean that train terminals would have to install checks for people entering Scotland through it’s railway lines. A similar approach taken by the Eurostars railway services.

However, the Scottish government, which is led by the SNP, responds with a clear no to the introduction of the borders, and that it will be the same for UK citizens wishing to travel to Scotland as it would be to the Republic of Ireland (ROI), where no passports will be required to be shown. The Scottish government say that there are ‘no plans in the foreseeable future’ to sign up to the Schengen agreement (which allows all EU citizens to cross internal borders within the EU without being subject to border checks). The UK and the ROI, have opted out of the agreement, and the SNP says that if Scotland joined the EU as an independent country, they would not be required to lose their automatic opt-out of the Schengen agreement. Scotlands intent is to remain a part of the Common Travel Area (CTA), which allows all UK, Republic of Ireland, the Isle of Man, and the Channel Islands citizens to travel freely across those borders. If Scotland is to gain independence, eligible citizens would be able to apply for a Scottish passport, however, it would not be mandatory to hold one, and UK passports would remain valid until they expire. Dual citizenship will also be permitted.

It seems an unlikely prospect, but passport checks on the Scottish-English border may be a real possibility. So whether you’re for, or against, the independence of Scotland from the UK, we can assure you that the polls are close, and nobody knows what’s in store for Scotland’s future. Do you think this is a scare story? Or do you think this is a valid possibility? Let us know where you stand on the whole situation. Tell us in the comments below.