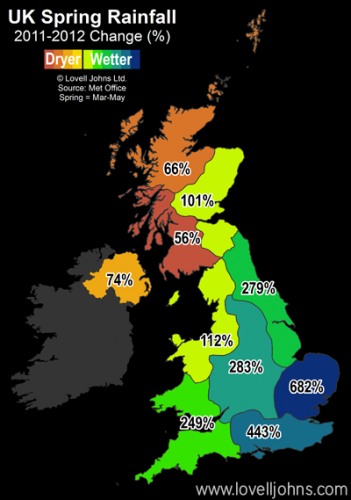 As The UK’s biggest water company has said it could lift its hosepipe ban sooner than expected after wet weather reduced the risk of drought, our rainfall map shows just how much more rain the UK has received compared to last year. Also visible, is what parts of the UK had the most increase in rainfall from the previous year.

The UK rainfall map shows the percentage┬áchange in rainfall comparing spring 2011 and spring 2012 during the months of March to May.

UK regions* that have seen the biggest increase in rainfall from last spring is East Anglia with a 682% increase and the South East (443% increase).

*data has been compiled from Met Office regions